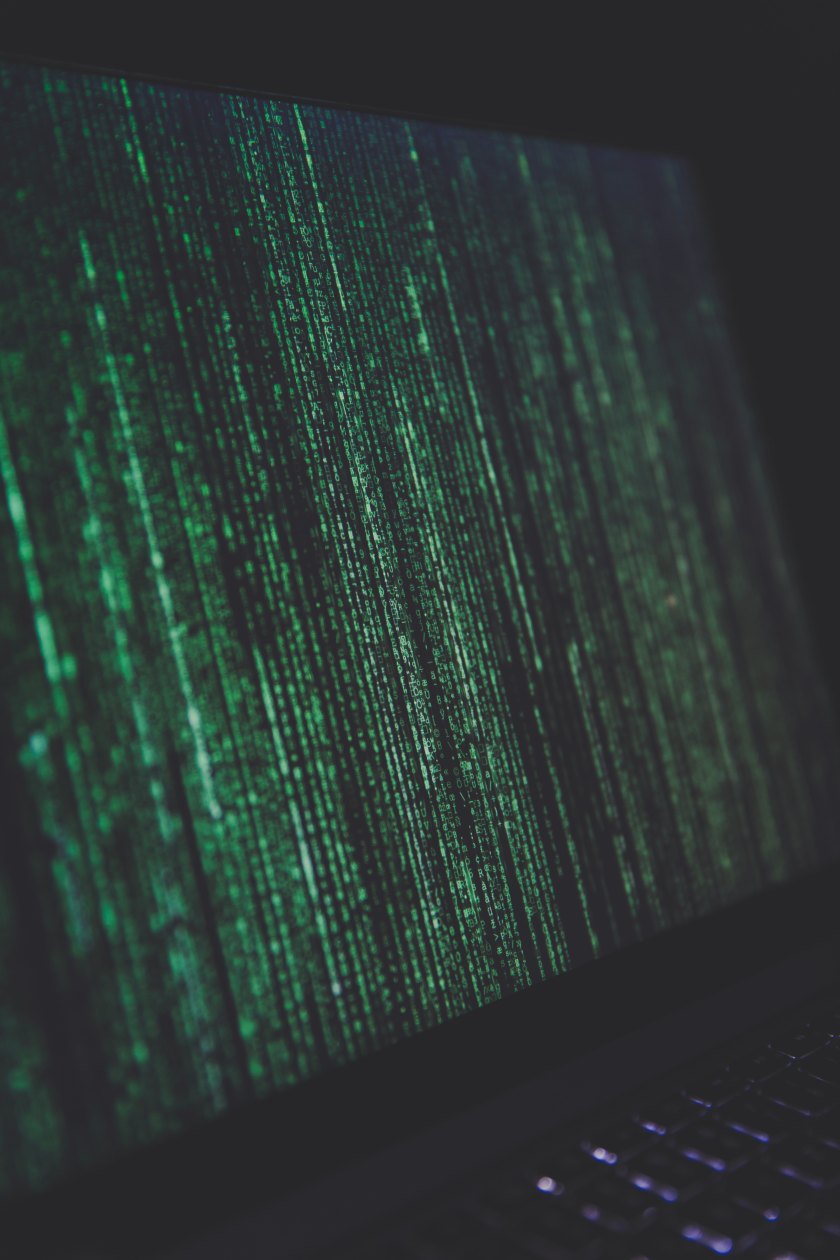 In the first post in this series we explained how SPHINCS can be improved thanks to the following trick: instead of generating a list of random numbers using a hash function (where you may have duplicates), generate a list of distinct random numbers using a pseudorandom generator. Our paper Clarifying the subset resilience problem analyzes in detail the security benefits of such a construction.

This new post summarizes the contributions from a second paper we published recently, Improving Stateless Hash Functions, also based on research made during Guillaume‘s masters thesis at Kudelski Security (his full report is available).

Again we’ll describe in a non-technical way the optimizations proposed to SPHINCS: secret key caching, batch signing, mask-less hashing, and last but not least Octopus authentication. But first, we’ll try to give a glimpse of how SPHINCS work, without the technical details.

(The optimizations described in this post are the basis for Gravity-SPHINCS, a variant of SPHINCS that we’ll submit to NIST’s project. By the way, we’ve created the page https://post-quantum.ch to track submissions announced as candidates.)

The 4 trees in SPHINCS

The SPHINCS signature scheme is not of the simplest kind, and is hard to understand by only reading its informal specification. So instead of trying to explain it fully, we’ll just describe its general structure, which can be seen as the combination of four types of trees:

You already know HORST, but maybe not WOTS, which stands for Winternitz One-Time Signature: in the hyper-tree of SPHINCS, WOTS instances are used to sign children node. See for example David’s post for a simple introduction to WOTS.

The hyper-tree structure can be visualized as in the figure below: 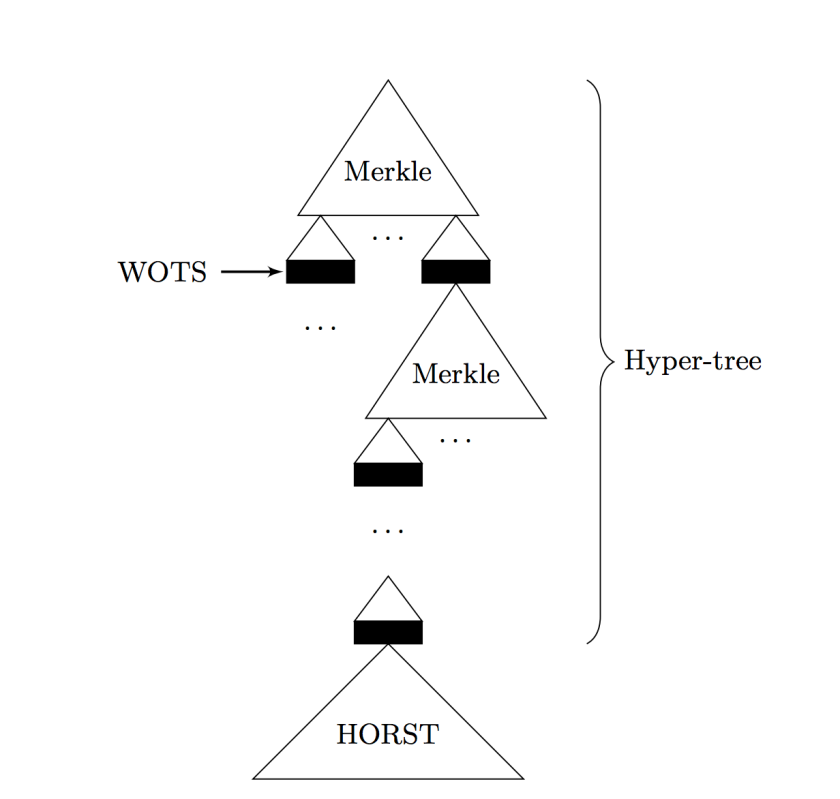 And that’s it. This is really a bird eye’s view of SPHINCS, and we omitted many details, but hopefully this will help you understand the optimizations described below.

Every time a SPHINCS signature is computed, the tree in the root layer of the hyper tree has to be recomputed. This reduces the key size by just storing the root, but adds additional computations and increases the signature size. A possible trade-off is therefore to view this top Merkle tree as part of the secret key, as depicted in the figure below:

Using this trick, we can use a top tree of 20 layers and cache 15 of these, which is equivalent to about 2MB of data. This reduces the signature size of 201 hash values, or 6432 bytes, and speeds up signature generation and verification because fewer WOTS instances have to be computed.

In simple terms, batch signing is a technique to sign multiple messages at once, much faster than if all messages were signed independently. The core idea is simple: instead of signing an actual message, sign the root of a Merkle tree whose leaves are the messages—yet another tree! You can visualize this as follows: 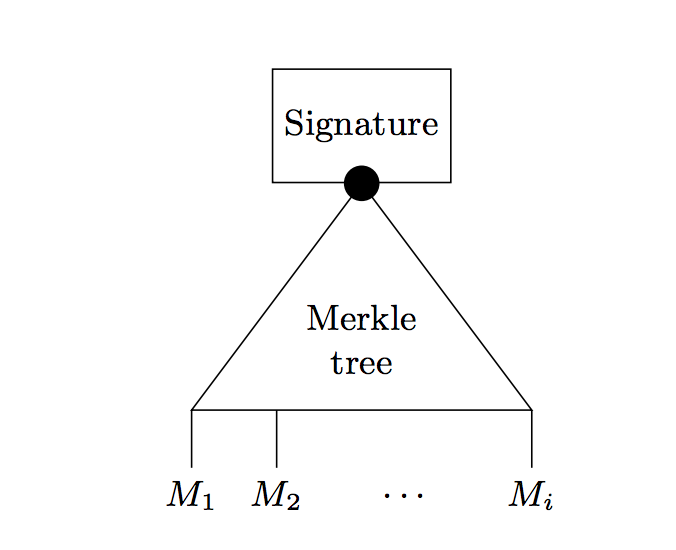 To verify the signature of a single message, you would just provide the authentication path of the message. Applied to SPHINCS, batch signing can be exploited to reduce the size of the underlying trees, since fewer signatures would be needed for a same number of messages (remember that SPHINCS needs such a huge tree in order to support the issuance of a large number of signatures).

For example, with 1024 messages per batch and keeping the bound of

messages per key pair, SPHINCS can be tweaked to save 4286 bytes per signature.

In the original SPHINCS, values to be hashed within a Merkle tree are first XORed with pseudorandomly generated values called masks, as shown below:

Using such masks has pros and cons:

We believe that having collision resistant hash functions is a totally reasonable assumption. Actually, you’ll always need a collision-resistant function to hash the message in the first place.

In Octopus-speak, we call authentication paths tentacles. When two tentacles merge—that is, when paths reach the same node when starting from the bottom of the tree—then octopus provides an algorithm to only keep a unique copy of each node, and totally eliminate redundancies. The figure belows shows a simple example of tentacles merging, where black nodes are the ones to authenticates, dark grey nodes are in the authentication path, and light grey nodes are computed:

The idea of octopus looks straightforward, but the analysis is not, see pages 10-14 in our paper. The upshot is that this trick leads to SPHINCS signatures shorter of 1909 bytes on average (the actual signature size varies depending on the message, because different messages will lead to different sets of tentacles).