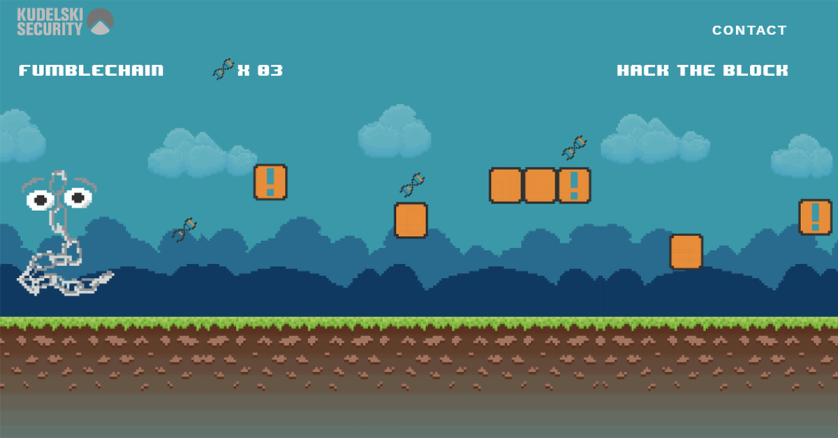 Hello everyone, today we are happy to announce FumbleChain, a purposefully vulnerable blockchain implementation. This project has been a labor of love for the Research team here at Kudelski Security since late last year. We will be unveiling this project at the Arsenal at Black Hat USA in Las Vegas in August.

The idea for the project first came out of a discussion the team had before the announcement of our Kudelski Blockchain launch last year at Black Hat Europe. It was mentioned we should do a crypto challenge to promote the launch, but being that time was limited, we thought it best to focus on something larger and more community oriented. This birthed the idea of a vulnerable blockchain implementation. Obviously, since Black Hat Europe was in December of 2018, it’s clear we had a few setbacks.

Early on, we stumbled with the departure of a team member, who had been working on the initial prototype. His departure caused us to miss the Q1 deadline, but gave us some buffer time to re-evaluate what we wanted the project to be and where we wanted to take it.

FumbleChain is meant to educate on both blockchain and blockchain security and is applicable to developers and security professionals alike. The project provides the following goals in a fun and CTF like manner.

Our hope is that people play with the code base and contribute back to the project making it a larger platform for knowledge on blockchain security. So, please use it for presentations and workshops.

There are several challenges included in the initial release, but we have more development planned for FumbleChain in the future – so stay tuned.

At some point, everyone on the Research team here at Kudelski Security had input into shaping the project, but a majority of the work on the current version was completed by Nils Amiet with additional assistance from Nicolas Oberli.

We hope you will join our team and shape the future of the project. Check out the page for the project and contribute to the development.