On 24 October 2017, BadRabbit/DiskCoder.D, a variant of Not-Petya, was discovered affecting Russia, Ukraine, Bulgaria, and other countries across Europe and Asia. This new variant leverages hard coded credentials, credential theft, and Windows administrative shares to spread across the local network. BadRabbit also attempts to infect WebDav servers using stolen credentials (such as Exchange severs) and lacks the ability to spread via the EternalBlue exploit which made its predecessor, Not-Petya, so effective.

The Cyber Fusion Center’s initial analysis has revealed that this attack is a new combination of pre-existing delivery, download, open source encryption tools, and ransomware messages. The initial infection vector is likely waterhole attacks and drive-by downloads. Once the machine is initially infected, the Diskcoder.D ransomware begins spreading the ransomware to other machines on the local network.

Kudelski Security has confirmed that DiskCoder.D does not upload the encryption keys to the attackers, as such, it’s likely not possible for the ransomware authors to actually decrypt files for any victims that have been impacted. Kudelski Security highly recommends that impacted victims do not make any ransom payments.

Kudelski Security continues to see attacks of this nature targeting different verticals and seemingly beginning in Europe. This most recent example comes on the heels of recent warnings from European and US based security groups, including Kudelski Security, about this kind of threat activity. 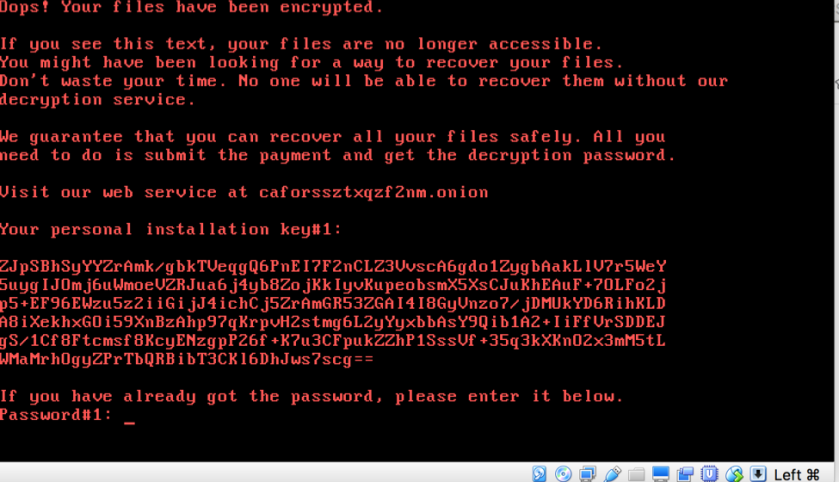 Once the malware is executed, it attempts to steal credentials from infected machines using MimiKatz. BadRabbit then attempts to identify other machines on the same local subnet by performing an Address Resolution Protocol (ARP) scan. Once additional potential victims have been identified, BadRabbit attempts to leverage the stolen and hard coded credentials to mount remote SMB shares on the target systems, copy, and execute the ransomware on those targets. Additionally, BadRabbit attempts to use WebDav to upload and execute the ransomware onto WebDav enabled systems (such as Microsoft Exchange).

At the same time as BadRabbit is scanning the network for additional victims, the ransomware creates two scheduled tasks on the machine:

Once BadRabbit has located additional victims on the local network and attempted to execute its malicious payload, a reboot occurs and the computer begins to encrypt the local drive. Encryption is performed using the legitimate and popular open source DiskCryptor software and is triggered via the “Rhaegal” scheduled task mentioned earlier.

The ransomware includes the following hard coded credentials (all username and passwords combinations are attempted):

Clients with network based intrusion detection systems (IDS) should look for alerts such as “GPL NETBIOS SMB-DS repeated logon failure” or similar alerts in order to identify potential attempts by BadRabbit to use hard-coded credentials to mount SMB shares.

The Kudelski Security Cyber Fusion Center has already performed hunting for BadRabbit/Diskcoder.D on behalf of our Threat Monitoring and Endpoint Detection and Response clients. The Cyber Fusion Center will create security incident’s if any suspicious or malicious activity is identified as part of this ransomware campaign.

The Cyber Fusion Center will continue to work with our vendor partners to ensure all managed and monitored technology is updated to detect this threat.

As we often see in these global outbreak and response scenarios, information can change quickly. The following are a few updates based on what we’ve learned since our initial advisory.

The following breaking information is subject to change as new data continues to pour into the CFC Threat Monitoring group.

Kudelski Security’s Cyber Fusion Center’s initial analysis has revealed that this attack is a new combination of pre-existing delivery, download, and malware/ransomware components. The initial infection vector is likely via phishing email or via the network (neither confirmed). Once the machine is initially infected, the Petyawrap’s worm component begins spreading the ransomware to other machines on the local network via several different methods, including the Equation Group’s EternalBlue exploit (similar to WannaCry). However, this worm is also leveraging PSEXEC (a way to remotely manage computers) and Windows Management Instrumentation (WMI) to infect machines already patched against EternalBlue.

Once a machine is initially exploited (either via EternalBlue or WMI), the worm begins to install the Petya Ransomware variant (https://securelist.com/petrwrap-the-new-petya-based-ransomware-used-in-targeted-attacks/77762/), which then restarts the affected endpoint and begins the encryption process. It’s important to note that the ransomware is leveraging vulnerabilities that were patched by Microsoft in March and built in Windows functions (such as WMI and PSEXEC) to spread. The usage of WMI and PSEXEC makes this worm effective against machines that may have already been patched against EternalBlue and other exploits. This ransomware variant has successfully automated the usage of highly effective methods traditionally used by advanced attackers to silently move laterally within a network by remotely executing code.

This variant can easily spread through the network because it lacks a Wannacry like “kill switch” to slow it’s spread.

Due to the usage of both the EternalBlue exploit and built in Windows management functions (WMI), the Cyber Fusion Center recommends that clients take the following actions:

Organizations must review and evaluate their vulnerability and patch management programs to ensure confidence, comprehensiveness, and effectiveness. Security patches are a fundamental and critical foundation of any organizations security program and should be tested and applied quickly. Organizations should also perform a “health checkup” and review backup strategies, test backups regularly, and ensure backups are easily accessible while also being protected from encryption and deletion. Additionally, organizations should be looking to implement strick controls to limit the usage Windows tools commonly used by attackers such as PSEXEC and WMI.

The CFC will continue to monitor client’s environments for indicators or this variant.

If you have questions or concerns please reach out to the CFC at cfc@kudelskisecurity.com or call the CFC hotline (regional based, refer to the Client Portal for your number.)